US data News and Analysis

Positive US data was released on Wednesday showing that the US economy grew faster than was initially expected in Q2. The US Bureau of Economic Analysis released GDP for Q2 showing a 3% annual rate. The release surpassed market expectations of 2.7% growth as GDP grew at its fastest pace in more than 2 years. Relatively robust consumer spending and improved business sentiment are the likely reasons for the improvement and now puts the US economy on a stronger footing as we enter Q3. In addition, the US ADP Employment Report surprised many with a strong release of 237K, beating the market consensus of 185K. This strong release further underscores a resilient US Labor market which can only help upcoming CPI expectations, as more Americans are working and, more importantly, spending money.

Friday’s NFP will hopefully show more positive news with the markets hoping to see an upward improvement in Average Earnings. Such positive economic data helped USD reverse recent losses, however, the response from President Trump that “all options” were on the table and the fact he dismissed any diplomatic negotiations with North Korea by stating “talking is not the answer” halted further USD advances, as the markets are concerned that tensions could rise further which may result in another round of risk-off sentiment.

EURUSD lost 0.5% on Wednesday to trade as low as 1.18942. EUR weakness continued overnight with EURUSD currently trading around 1.1875.

USDJPY gained over 0.6% on the day, trading as high as 110.435, before giving back some of its gains. In early trading, USDJPY has further strengthened to currently trade around 110.50.

GBPUSD improved slightly on Wednesday, although it remained in a relatively tight trading range. Currently, GBPUSD is trading around 1.2925.

Gold traded within an $8 range on Wednesday, as markets digested risk tolerance following improved US data and President Trump’s response to North Korea. A risk on sentiment overnight has seen Gold trade lower. Currently, Gold is trading around $1,303.

WTI pared back recent losses, gaining 0.7% on the day. Currently, WTI is trading around £46.25pb.

At 09:00 BST, German Unemployment Rate & Unemployment Change for August will be released. With an expected change of -6K which will further underscore an improving German economy.

At 10:00 BST, Eurozone Consumer Price Index & Core year on year for August will be released. Non-core is expected to come in at 1.4%, up from the previous release of 1.3%. Upward inflationary pressure will assist the easing of Eurozone economic policy and, potentially, see interest rates rise in the future.

At 13:30, US Personal Consumption Expenditure Price Index & Core (MoM) & (Y0Y) for July will be released. With no increases expected from both indicators, the lack of inflationary pressure will not help the Fed’s plans to increase interest rates later this year. 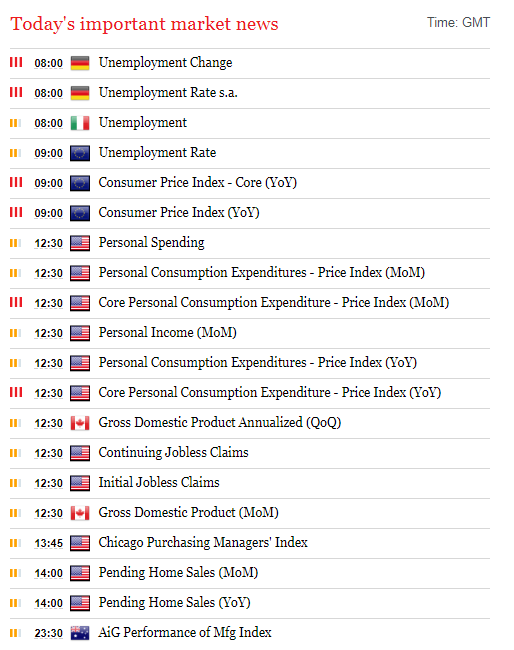