US dollar and FOMC in focus

US dollar and FOMC in focus – The greenback resumed losses yesterday despite an upbeat ISM and Markit manufacturing PMI figures. The declines came about as the euro broke through above 1.1000 resistance level and remains within reach of the next technical resistance at 1.1100.

The FOMC meeting which started yesterday is expected to conclude today with the release of the FOMC statement. Economists expect no change to the Fed funds rate today, but clues on forward guidance on rate hike prospects for December weigh on the markets.

EURUSD (1.1072): The single currency surged ahead yesterday despite a quiet economic calendar from the euro zone. The US ISM manufacturing PMI as well as Markit’s manufacturing gauge both beat estimates but the data did little to stem the dollar’s decline. The gains in the euro came after price managed to break out from the 1.1000 – 1.0975 resistance level.

EURUSD looks poised to challenge the 1.1100 resistance level that lies ahead with the scope to test higher towards 1.1150. Besides the FOMC statement, the ADP payrolls report will be seen as an additional catalyst for the markets today. To the downside, EURUSD looks well supported at the recently broken resistance level of 1.1000 – 1.0975 which could attract more buyers into the market, keeping the single currency well supported in its target to 1.1100. 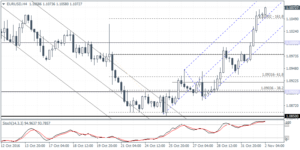 The upside looks fairly limited to 104.00, but a breakout above this price level could see the gains extend the retracement back to the 105.00 region. Despite this possibility, USDJPY remains biased to the downside towards the 103.00 price level with the possibility of a decline down to 102.00. The Stochastics on the 4-hour chart is currently oversold which could keep the dollar range bound against the yen. 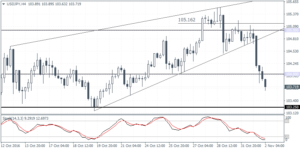 NZDUSD (0.7228): The Kiwi is looking to capitalize on a weaker greenback and better than expected labour market data. At the time of writing, the kiwi is seen rising to a 9-day high, trading near $0.7228. As noted in the daily commentary a few days ago, the NZDUSD is chalking out a head and shoulders pattern. Short-term resistance is seen at 0.7265 – 0.7233, marking the high of the previously marked high of the right shoulder.

A breakout above this resistance could keep NZDUSD on par for more gains. However, in the event of a price reversal near this resistance level, the NZDUSD could be seen pushing lower in the coming weeks. Neckline support is seen at 0.7046 – 0.6982 which will act as the immediate support that could see price bouncing off this level. 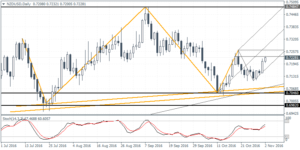 The Australian dollar slid lower against its U.S. counterpart on Wednesday, after the release of downbeat building approvals from Australia, while the New Zealand dollar moved higher after local inflation expectations came out in line with expectations.

Earlier Wednesday, the Australian Bureau of Statistics said that building approvals dropped 8.7% in September, compared to expectations for a 3.0% slide and after a 1.8% fall the previous month.

The data came a day after the Reserve Bank of Australia left its benchmark interest rate unchanged at 1.50%, sending the Aussie broadly higher.

The Reserve Bank of New Zealand reported on Wednesday that its inflation expectations for the next two years remained unchanged at 1.7% in the third quarter.

Meanwhile, the greenback remained supported amid growing expectations for a December rate hike by the Federal Reserve.

However, investors remained cautious after the FBI said last Friday that it would review more emails related to Hillary Clinton’s private email use while she was secretary of state.

The news sparked fresh uncertainty over Mrs. Clinton’s election prospects ahead of the November 8 vote, amid fears over the implications of a victory for Republican candidate Donald Trump.

The U.S. dollar index, which measures the greenback’s strength against a trade-weighted basket of six major currencies, was down 0.10% at 97.66, the lowest since October 18.

Orbex Forex Broker – Review and Forex Cashback up to 85%