US dollar index News and Analysis

US dollar index News and Analysis

The US dollar posted strong gains in early trading today and continued its bullish momentum after the US dollar index broke above the 96.00 resistance level yesterday. Further gains can be seen, but resistance at 97.35 remains a strong level to contend with as a near term pull back to establish support at 96.00 could be the main risk as the September jobs report is due for release later today. 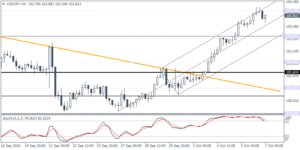 USDJPY (103.82): USDJPY has posted eight straight days of gains with price action currently consolidating near the 104.00 resistance level. The breakout from the falling trend line has seen no pullback to the breakout level near 102.00 whatsoever and could, therefore, post a major downside risk if the resistance at 104.00 proves hard to break. On the 4-hour chart, price action in USDJPY shows a fresh doji pattern that was formed near 104.00 and further downside could be seen coming. Support at 103.00 will be the initial level that could be challenged, and a breakdown below this support could trigger further declines to 102.00 – 101.61. 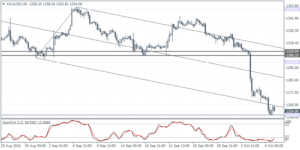 XAUUSD (1254.06): Gold prices continued their declines yesterday, and price action is currently trading near the 1250 support level. On the daily chart, the RSI shows a hidden bullish divergence near the support and could indicate a potential move to the upside if this is validated. A retracement to 1300 cannot be ruled out, but at the same time, a breakdown below 1350 could trigger further downside towards the next psychological support at 1200. On the 4-hour chart gold initially bounced off 1250. Expect to see some near term consolidation at the current levels ahead of what could be a correction in the near term. 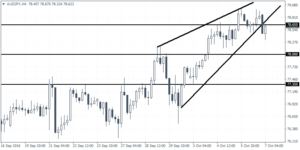 AUDJPY (78.62): AUDJPY has broken out from the rising wedge pattern with yesterday’s session closing out with a doji. Price initially fell to lows of 78.45 before the current retracement back to 78.65. If this break out level holds, AUDJPY could post further declines with support at 78.00 being challenged. A breakdown further could send AUDJPY down to 77.35 support. The short term bearish view will be invalidated should price retrace back above the 78.65 level in which case the most recent highs near 79.00 could be at risk for an upside continuation in the trend.