US Equities at Record Levels

US equities closed at record levels on Wednesday, as improved risk-on sentiment returned to the markets and news that the US economy will benefit if the US tax reform is passed. US Treasury Secretary Mnuchin stated on Tuesday that “tax reform could be backdated to January 1st, 2017 as it would be a “big boon for the economy.” He also commented that the Trump administration was “super focused” on ensuring tax reform would be completed by the end of the year. Such comments helped the supported rise in US Treasury Yields.

On Wednesday, Asian equity markets reached a 10-year high, although the markets remain cautious that geo-political tensions between North Korea and the US could escalate following President Trump’s comments that the recent UN sanctions against North Korea were a “very small step” and “nothing compared to what ultimately will have to happen” to deal with North Koreas’ nuclear program. Following the recent sanctions, North Korea has vowed to redouble its efforts to fight of the threat of a US invasion. With continued rhetoric, markets will remain on edge and will ultimately look to safe havens.

UK Consumer Price Index was released on Tuesday, showing increasing UK inflation rising to 2.9% (YoY) in August. GBPUSD reached a 1 year high on the news. Inflation above the Bank of England’s target of 2% has been complicating why policy makers are not raising UK interest rates. With a Bank of England Policy meeting being held on Thursday, the markets are looking for clues as to the likely timing of rate hikes.

Gold lost ground against USD and currently trades around $1,330.

WTI was trading in a narrow range ahead of today’s EIA report. Currently, WTI is trading around $48.70.

The major economic data releases for today will be:

At 13:30 BST, the Bureau of Labor statistics, Department of Labor will release Producer Price Index (MoM) for August. As a clear indicator of commodity inflation, this release could potentially help the Federal Reserve in its plans for a further rate hike this year if the release comes in strongly. The previous release, of -0.1% is expected to be bettered with the consensus calling for an increase to 0.3%. If the release is wildly different from the consensus we can expect USD volatility.

At 15:30, the Energy Information Administration will release Crude Oil Stocks change for September 4th. The impact of Hurricane Harvey is still being felt in the US, so markets will be eager to see if the consensus comes in at 2.285M (from the previous 4.580M). Expect Oil to see volatility if the released number is significantly different than the consensus. 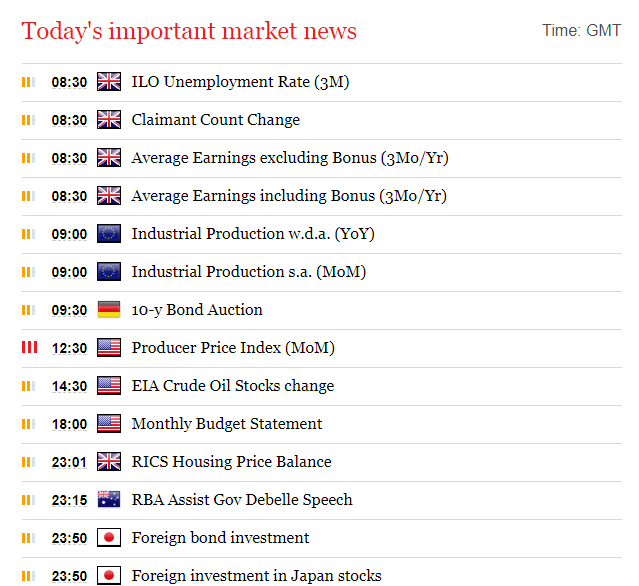 Categories : Tags : North Korea and the US US economy