US Jobs and China Factories to Define Week in Forex

US Jobs and China Factories to Define Week in Forex

Federal Reserve rhetoric has given the USD a pass after the September 17, monetary policy meeting when rates were held unchanged. The market was not shocked by the decision to hold, but surprised that the Fed has not taken the opportunity to raise rates when the U.S. economy was showing strong signs of recovery. The USD fell, but was quickly brought back by a speech from Fed Chair Janet Yellen the following week. Further comments, even contradictory ones, from Fed members have kept the market confused.

The lack of action from the Federal Reserve has put pressure on other central banks to act. The European Central Bank President Mario Draghi has commented on the possibility of further quantitative easing, but right now it is not needed. The USD continues to gain on the back of interest rate divergence expectations even as the Fed has done a lot of talking with little to show for it.

U.S. employment continues to show resilience and the first indicator release of the week will be the ADP private payroll non farm employment change on Wednesday, September 30 at 8:30 am EDT.

One of the biggest changes in the September FOMC statement and press conference was the inclusion of macro economic headwinds and the Chinese slowdown in particular. This week the official China manufacturing PMI will be published on at 9:00 pm EDT, followed by the third party Caixin manufacturing PMI at 9:45 pm EDT. 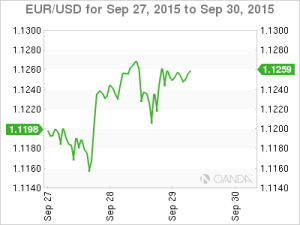 The flash manufacturing purchasing managers index (PMI) complied by Markit along with sponsor Caixin was released on September 23 and it generated anxiety in the market about a prolonged slowdown of the Chinese economy. The reading was a six and a half year low 47.0. The forecast called for a slightly better 47.6. The preliminary PMI is the result of a survey of 430 purchasing managers on business conditions. The fact that this is a third party report gives it more credibility after China is struggling to lend transparency to its official data.

The official PMI will be released 45 minutes ahead of the Caixin PMI. The state sanctioned survey includes the opinions of 3,000 purchasing managers and printed 49.7 which is slightly below the level of expansion. The data is compiled by the China Federation of Logistics and Purchasing and will be released on Wednesday, September 30 at 9:00 pm EDT.

Global stock markets have been impacted by the signs that point to a slowdown in Chinese growth. The government has made efforts to lower expectations in order to avoid a hard landing, but their inability to act decisively after their stock market sell off eroded confidence in state institutions.

Commodity producers like Australia, Brazil and Canada have suffered as Chinese demand has dropped lowering prices even further. A lower PMI will have put downward pressure on those nation’s currencies versus the USD and the EUR. Global indices have not weathered the Chinese concerns well as panic has driven the price action until the central bank has been forced to calm the market with unscheduled interventions.

The ADP private non farm payrolls have missed expectations for two consecutive months. Last month’s private jobs gains were 190,000 when 204,000 was the forecast. The overall trend is still positive and the two year monthly average is above 200,000. The data provided by the payroll company ADP does not correlate 1 to 1 to the government’s non farm payroll report (NFP) published by the Bureau of Labor Statistics on the first Friday of every month, but at the moment they both reflect a strong recovery in American jobs.

This months ADP payrolls are anticipated at 191,000. Forecasts have been adjusted after the missed expectations of the previous months. Anything above expectations will be positive for the U.S. dollar with the caveat that it might not fully predict the more important NFP figure release on Friday.

Employment indicators are the top priority of the Federal Reserve when looking at a potential rate hike. So far the jobs component has been strong, but not enough for the Fed to hang a rate hike on them. The market is questioning the American central bank for its logic regarding data dependancy.

Employment gains will not continue ad infinitum and will run into a wall at some point in the future. The Fed could potentially lose out on one of its biggest indicators supporting intervention if they don’t act before that happens. The other side of the argument is that the Fed has already lost the perfect window to start a rate hike cycle and will probably pause until more favourable conditions present themselves, but given the lack of stability in the market this could very well into next year despite Fed members comments on the likelihood of a 2015 rate raise.

Yes as i see in ForexFactory website tomorrow 30 Oct is important day for Forex!