US Retail Sales to Bring Clarity After Fedspeak Confusion

US Retail Sales to Bring Clarity After Fedspeak Confusion

A day ahead of the release of the U.S. retail sales figures six Federal Open Market Committee (FOMC) members delivered speeches that were seen as hawkish, dovish and something in between. The market expectation as measured by the CME FedWatch tool puts the rate hike at 69.8 percent probability but as usual Fed members comments confused markets more than reassured them on the final outcome on December 16.

U.S. retail sales and the core data excluding automobiles have underperformed since coming in flat in August. Consumer demand is needed for sustained growth and outside of car sales the other sectors are struggling. The forecast calls for a 0.4 percent core retail sales change and a 0.3 percent of retail sales in October. Lower prices in food and energy have affected the overall positive demand, but a turnaround is expected in the coming holiday season. Stronger core retail sales could put the Fed one step closer to finally raising benchmark interest rates, but a weak indicator would raise further questions about the American economy’s momentum after a strong jobs report. U.S. retail sales will be published on Friday November 13 at 8:30 am EST. 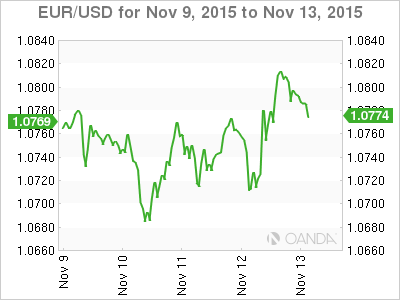 Fed Speak at Full Force Ahead of US Retail Sales

Bullard and Lacker both are in favor of raising rates, although Lacker has gone so far as voting for them in the previous FOMC meetings. Dudley repeated the data dependency mantra and regardless on when the American interest rates do go up, they will do so gradually. Evans focused on the employment gains that dispelled doubts about the state of the jobs led recovery. Chair Yellen stuck to the topic of her opening remarks at the Conference on Monetary Policy Implementation in the Post-Crisis Period and did not give any hints towards the upcoming monetary policy meeting in December 16.

ECB’s Draghi and Weidmann Talk Both Sides of QE

American policymakers were not the only ones grabbing headlines as the two more visible European Central Bank members: President Mario Draghi and Bundesbank Governor Jens Weidmann chimed in about the European economy. Mario Draghi’s comment earlier in the day had a negative effect on the EUR as the ECB President reiterated that he is ready to act in December. The hints of further QE stimulus put downward pressure on the single currency. The head of Germany’s central bank is known as not being fond of quantitative easing as it is blurring the lines between monetary and fiscal policy. Weidmann claims that the Eurozone economy is not facing deflation and are more likely facing a temporary impact of low energy prices.

The two European policymakers made speeches that at time contradicted each other and in other instances were more than complementary. Weismann called QE an action needed only in exceptional circumstances, yet that is what Draghi is arguing. Draghi was more dovish in general as he outlined Europe’s biggest risk being the Emerging market slowdown.

European GDP data, in particular that of Germany and the U.S. retail sales releases will be the main focus of the forex market as investors look for direction ahead of December and hints for the monetary policy decisions of the Federal Reserve and the European Central Bank.

EUR/USD events to watch this week:

I hope we can see an uptrend today on EUR/USD

I dont agree with you,euro/usd experiences decreasing prices for today and next week as well