US stocks and OPEC

US stocks and OPEC – US stocks closed higher yesterday, led by gains in the energy sector as OPEC announced plans to cut production, to be formalized in the November OPEC meeting. The news helped lift commodity currencies as well with the Canadian dollar and the Norwegian Krone posting the biggest gains among its peers. On the economic front, Janet Yellen continues with her testimony today while the second quarter US GDP is up for the final revision today followed by pending home sales data.

OPEC AGREES ON OUTPUT CUT For the first time in 8 years, OPEC agreed to cut production. The group’s total output will be restricted to 32.5mn-33mn b/d. The smaller number would be a cut of about 750k b/d from what OPEC said it pumped in August. 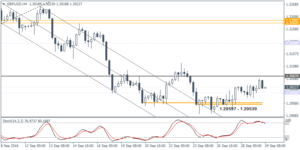 GBPUSD (1.3022): GBPUSD has narrowed in its range but has managed to hold out near the 1.3000 handle with yesterday’s session closing in a doji. On the 4-hour chart, following a brief consolidation near 1.2960 – 1.2954 support, GBPUSD managed to bounce higher but is challenged by the resistance at 1.3067. Further gains can be expected only on a breakout above this level for 1.3200 initially. To the downside, price action could remain range bound within the current levels. 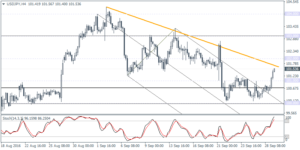 USDJPY (101.53): USDJPY is seen extending gains today, with prices currently trading at a 6-day high. Resistance is seen at 102.00 which could temporarily keep a lid on prices unless we see a strong breakout above this level. The 102.00 resistance level shows a confluence between the falling trend line and the horizontal resistance. On the 4-hour chart, there are bearish signs as the Stochastics shows a hidden bearish divergence. Near-term pullbacks can be expected back to 101.00 through 101.60. 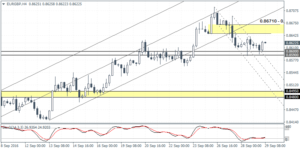 EURGBP (0.8622): EURGBP continues to remain on the watch list as prices are currently showing a reversal off the 0.8600 support level. A near-term pullback could see EURGBP trim its losses with a retest back to the resistance level of 0.8671 – 0.8648. The overall bias is likely to remain to the downside if we get a confirmation of a reversal near the resistance level. However, mind the fact that the daily session in EURGBP closed with a doji which hints at a near-term recovery in the declines.

Comment: intraday technical indicators are mixed and call for caution.