Fading support for President Trump is weighing on USD, as the US administration is finding it difficult to get enough backers in the Senate to pass the healthcare reform bill, raising questions about how the rest of its ambitious agenda would fare. USD was also weakened by the fading likelihood of US interest rates rising in the near term, the likelihood of a rate hike in December has fallen below 50%. The minutes from the July Reserve Bank of Australia meeting showed the RBA remains focused on keeping its monetary policy easy to suit domestic conditions and that data on labor and the housing market will continue to be closely watched. The RBA commented that strength in the jobs market removed some downside risks in wage forecasts, while signaling it isn’t ready to join global Central Banks in reducing policy stimulus. Such comments suggest the likelihood of a hike in AUD interest rates is unlikely to happen anytime soon.

With the Marine Day holiday in Japan on Monday, the market was relatively for USDJPY which traded in a tight range of 112.34 to 112.769. Overnight USD weakness has seen USDJPY trade as low as 111.983. Currently, USDJPY is trading around 112.10.

GBPUSD retraced slightly after hitting 10 months’ highs last week. Much uncertainty remains as the UK began “round 2” of Brexit discussions in Brussels on Monday. It is likely any information coming out of these discussions will impact GBP. Currently, GBPUSD is trading around 1.3105.

Following the release of the Reserve Bank of Australia minutes of its July 4th meeting, AUDUSD climbed to trade as high as 0.7908 in early trading. AUDUSD is currently trading near the day’s highs.

Oil backed off from highs set in early Monday trading of $47.03pb to trade slightly lower to $46.45 on the day. Oil has stayed relatively strong of late, as the markets note that fewer drilling rigs were added in the US, which has helped ease concerns that rising US shale supplies will undermine OPEC production cuts. A further sign of strong demand came from data released on Monday showing refineries in China increased crude throughput in June to the 2nd highest on record. OPEC hopes higher demand in the 2nd half of 2017 will get rid of excess inventory. Currently, WTI is little changed trading around $46.25pb.

Gold continued its recent upward trend also benefitting from USD weakness. A rise of 0.4% on the day saw Gold reach a high of $1,235.27 on Monday and the trend has continued into Tuesday with Gold trading as high as $1,238.71. Currently, it is trading around $1,238.

At 09:30 BST, UK Consumer Price Index (YoY) (Jun) data will be released. The markets are expecting the rate to remain at 2.9%. A reading higher than 2.9% may result in the Bank of England accelerating the schedule for further rises in UK interest rates.

At 14:30 BST Bank of England Governor Mark Carney is scheduled to deliver a speech. The content of his speeches will give the markets an indication of the state of the UK economy and many will be looking at the tone to determine when further interest rate hikes are likely to happen. 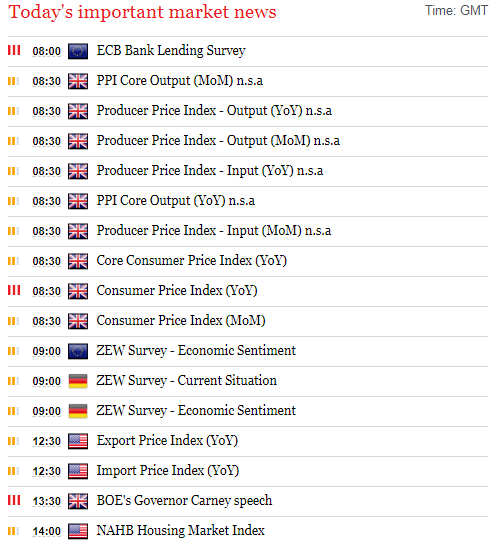