The latest Chinese economic data points to steady global demand. The world’s second-largest economy trade surplus grew for a 5th consecutive month in July, as demand for Chinese goods held up in the face of growing tensions with the US.

Another set of unexpectedly positive data out of the US saw USD gain against many of its peers on Tuesday. The US Bureau of Labor Statistics JOLTS Job Openings (Jun) release of 6.163 million was 388K better than the expected release of 5.775 million, resulting in a record number of job openings in the US. Further USD buying resulted from the IBD/TIPP Economic Optimism (MoM) (Aug) that was released with a 52.2 reading besting the consensus of 50.6, indicating US consumer’s improved optimism towards current economic conditions. Typically, these US indicators are not “market impactful” however, with somewhat lackluster markets of late, any news, whether positive or negative, is having an exaggerated effect on the markets.

The latest tensions between the US and North Korea caused President Trump to react with the comment that further threats from North Korea would be met with “Fire & Fury”. The markets reacted with a slight risk off sentiment with typical safe havens, such as JPY and Gold, in demand.

USDJPY was subdued on Tuesday, trading in a sub 60 pip range. Currently, USDJPY is trading around 110.00 after reaching a 2-month low in early trading of 109.738, following Trumps reaction to North Korea.

GBPUSD, after holding above 1.30, broke lower to 1.29521 on Tuesday due to overall USD bullishness. GBPUSD is currently trading around 1.2990.

Gold dropped 0.4% on Tuesday to trade as low as $1,251.41, before rebounding higher overnight as markets bought “safe havens”. Gold is currently trading around $1,265.

WTI edged 0.35% lower on Tuesday, as Saudi Arabia said it would pressure other OPEC members to improve their compliance rate, but there is still the question of Libya and Nigeria, both exempt from the cuts, which are ramping up their oil output at a respectable rate. WTI is currently trading around $49.18pb.

At 11:00 BST the UK Treasury Committee will hold its Inflation Report Hearings.

At 15:30 BST, EIA Crude Oil Stocks change (Aug 4) will be released, with a consensus drawdown of -2.800 Million. With successive recent drawdowns, the market will be evaluating the release in respect to overall US supply/demand.

At 22:00 BST, The Reserve Bank of New Zealand will publish its Interest Rate decision and its Monetary Policy statement. Consensus is for the RBNZ to hold interest rates at 1.75%, but markets will be wary for any change in the “tone” of monetary policy. 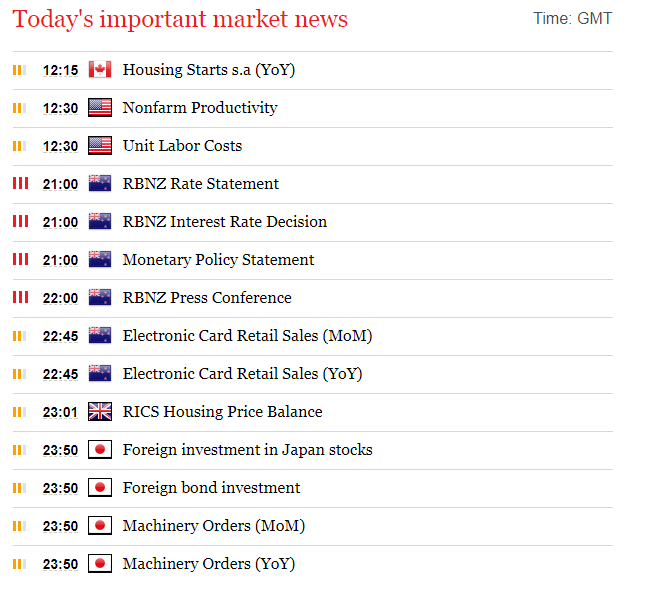 Categories : Tags : US and North Korea US indicators USD News and Analysis