Source: FXCC Forex Broker(Review and Forex Rebates up to 85%)

The yen which is the most liquid currency in the whole of Asia’s economy is also a form of proxy for the entire Asian economic growth. When instability is observed in the Asian sector, traders generally respond by selling or buying the yen as a replacement to other Asian nation’s currencies that are not as easy to trade. It is also worth mentioning that the Japanese economy registered a record period of low economic growth and relative low interest rates. When trading USD/JPY, a leading indicator of its future price direction is the Japanese economy which we must pay attention to.

Many forex circles recognize the Yen’s influential role in the carry trade. Due to Japan’s very low interest rate policy that has held for most of the 1990s to 2000s, traders borrowed the Japanese currency at a small cost and then used it to invest in other better yielding currencies. This generates benefits from the rate differentials.

Thus in the global context, the constant borrowing of the Yen proved appreciation to be a challenging task. Even so, the Yen trades with the same basic fundamentals as any other currency.

One of the dully noted major influences in the Japanese currency value is the US Dollar. This unpredictable behaviour is the reason why forex traders use technical analysis to understand the dynamic of this pair, on a long term perspective. Regular trading ranges may vary from 30 or 40 pips to as high as 150 pips. 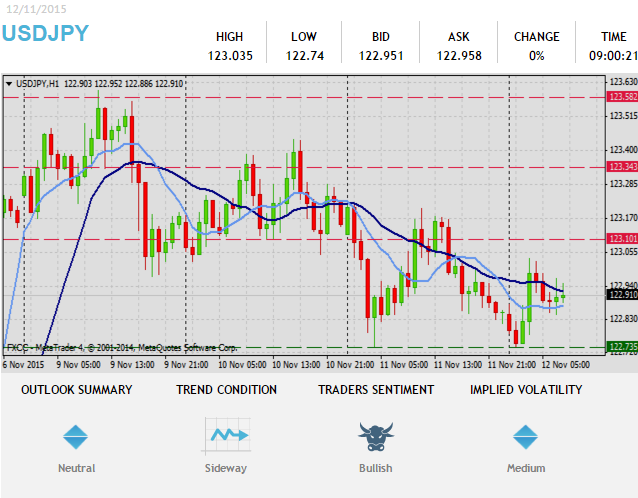 Upwards scenario: Upside progress above the resistive measure at 123.10 (R1) is required to stimulate bullish market participants to open long positions. Initial targets locates at 123.34 (R2) and 123.58 (R3), however we are not expecting significant moves today. Downwards scenario: Both moving averages remains downwards oriented and there are more chances of price depreciation on the short-term perspective. Next on tap is seen support level at 122.73 (S1), price could break it soon and enable 122.49 (S2) – 122.26 (S3) target zone.

I cant see any reason to buy usd/jpy now.I\'m looking for a good sell signal