WTI Crude Oil – The WTI Crude Oil market initially fell during the course of the session on Thursday, but having said that we turn right back around to form a bit of a hammer. The hammer of course suggests that there are plenty buyers below and that we will continue to grind away towards the $50 level, which of course has quite a bit of psychological significance. If we can break above the $50 level, it’s very likely that we will have a longer-term “buy-and-hold” type of situation going forward. If we pullback from here, there should be plenty of support near the $48 level, and with that being the case it’s likely that buyers will continue to return to this market again and again and therefore we are bullish at this point in time, and have no interest in selling this market until we break down well below the $46 handle. 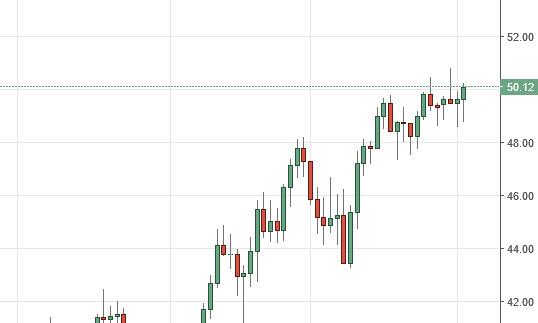 Brent markets initially fell during the course of the session on Thursday, but turned back around to form a hammer. We did break above the $50 level, it’s likely that we will try to grind our way towards the $54 level. If we can break above there, becomes more or less a “buy-and-hold” type of situation. Between here and there, we are willing to buy pullbacks on signs of support as it allows traders to find value. Ultimately, this market looks as if it is trying to build up enough momentum to go higher, so at this point in time you may have several opportunities to go long again and again.Ultimately, this market should continue to go higher but you’re going to have to be able to deal with the massive amounts of choppiness that will occur in this market. Keep in mind that both petroleum markets will probably be highly influenced by the jobs number coming out of the United States. This of course ultimately shows that currencies can still come in to play as the US dollar will be volatile due to the number, and of course that will translate into the oil markets rocking back and forth.