The Japanese yen tumbles sharply today as BoJ cut its benchmark rate to -0.1%, with a 5-4 vote, from 0.1% previously. This is the central bank’s first rate adjustment since October 2010. Note, however, that the negative rates decision will only affect some accounts as it adopts a ‘three-tier system’. The drive for the cut is to return inflation to the 2% target ‘at the earliest possible time’. Policymakers also suggested that ‘further decline in crude oil prices’ and uncertainty particularly in the Chinese economy might prolong deflation in the country. The BoJ again delayed the timeframe for achieving this target to fiscal year 2017. Policymakers pledged to ‘cut the interest rate further into negative territory if judged as necessary’. The BoJ left the asset purchase program unchanged at expansion of base money at an annual pace of 80 trillion yen. More in BOJ Adopts Negative Rates.

Separately, Japan released its latest macroeconomic data earlier today. Headline core CPI steadied at 0.1% yoy in December. Tokyo core CPI contracted -0.1% yoy in January, after a 0.1% gain a month ago. Household spending contracted -4.4% yoy in December, deteriorating from a -2.9% in the prior month and consensus of a -2.3% drop. Japans’ industrial production contracted -1.4% m/m in December, compared with market expectations of -0.3% and November’s -0.9%. The unemployment rate, however, stayed unchanged at 3.3% in December.

Asian equities surged today in response to BoJ’s announcement with Nikkei rose 2.8% or 476 pts. Hong Kong HSI also jumped 2.23% or 427 pts while China SSE Composite rose 3.09% or 81.9 pts. Meanwhile, crude oil also extends recent recovery and is trading above 34 for the moment and that provides support to sentiments too. It’s reported that Russia indicated that a meeting might be held with the OPEC next month to discuss about production cut. Russian energy minister Alexander Novak noted that a 5% cut was “precisely the subject for debate”. But that was quickly denied by OPEC which clarified that the proposal to cut output by 5% was suggested by Algeria and Venezuela, instead of Saudi Arabia.

USD/JPY’s rebound from 115.96 extends as expected. The strong break of 120.33 support turned resistance should now pave the way to 123.74 resistance next. As noted before, price actions from 125.85 are viewed as a sideway consolidation pattern. There is not enough evidence to indicate a breakout yet. Thus, we’ll be cautious on strong resistance between 123.74 and 125.85 to bring near term reversal. On the downside, below 119.06 minor support will turn bias neutral first. 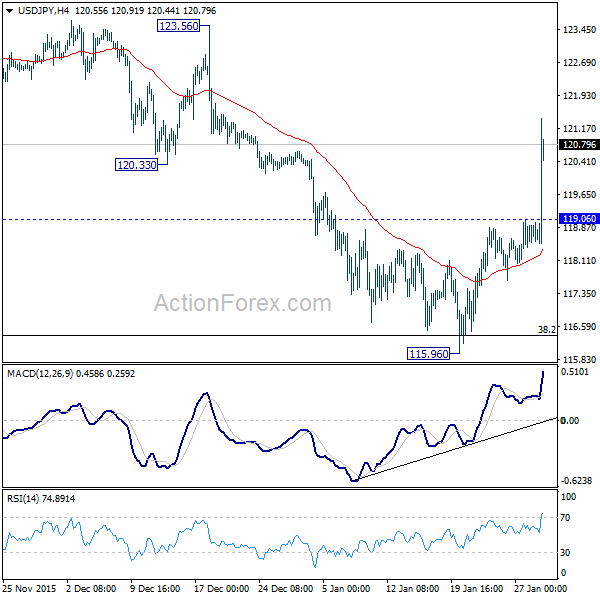 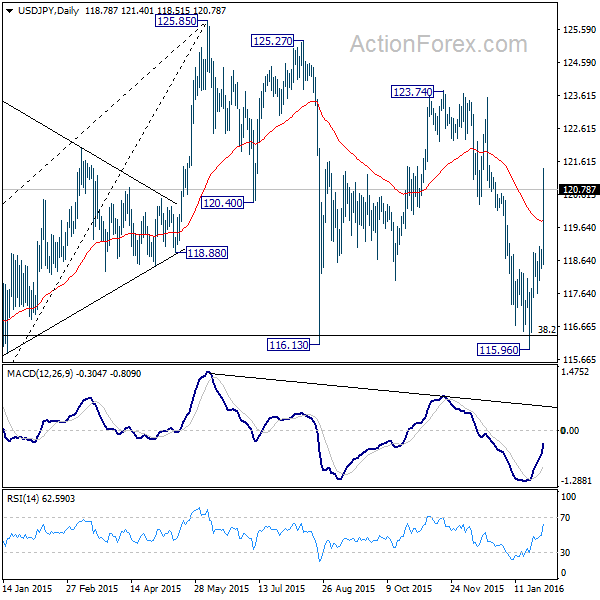