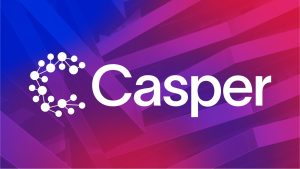 What is Casper? Casper and Its Unique Blockchain

The usage of blockchain technology has recently increased in importance across a variety of global sectors. Unintentionally, this phenomenon has coincided with a blockchain’s tremendous growth as it marks its first birthday: Casper.

Over the last year, Casper has experienced rapid growth, recruiting some of the industry’s best users, developers, and collaborations. It has also solidified its position as one of the blockchain projects with the quickest growth rates and a significant participant among Layer 1 networks.

By employing its special consensus process known as “Correct-by-Construction,” Casper is a decentralized layer-one proof-of-stake (PoS) blockchain that seeks to resolve the blockchain trilemma of scalability, privacy, and decentralization.

Through the function of WebAssembly (WASM), which enables designers to quickly construct bridges from their current systems to blockchain applications using conventional coding languages, the network is intended to speed business and designer adoption of blockchain.

With Casper, developers can update smart contracts that have already been put on the chain to reflect new agreements reached by the parties. This flexibility allows organizations and corporations the chance to introduce new features or fix issues in the on-chain code.

The Casper chain, which aims to hasten developers’ adoption of blockchain technology, uses CSPR as its native coin.

A brief history of Casper

Written by Daniel Kane, Andreas Fackler, Adam Ggol, and Damian Straszak, the whitepaper for Casper was made public on January 19, 2021. The Casper foundation, a non-profit association, oversees the decentralization and growth of the Casper network. In addition to supporting the growth of Casper’s decentralized application ecosystem, it offers tools to assist speed Casper’s adoption. The Casper Association is presided over by Patrick Storchenegger. The administrators of the Casper foundation are Ralf Kubli and Daniel Biesuz.

Casper network: What is the mechanism behind it?

Through a network of nodes from dispersed geographical locations, Casper relies on validators as a PoS network to confirm transactions and guarantee the platform’s security. Involved nodes can achieve consensus using the CBC Casper consensus protocol method by creating and wiring messages about recently produced blocks. You must stake CSPR tokens in order to join the network as a validator, which entitles you to incentives for taking part in block validation.

With the capacity to modify smart contracts, Casper’s blockchain is future-proof, giving it an advantage over existing commercial blockchains. In addition, Casper employs a package management mechanism for smart contracts that enables on-chain contracts to be directly upgraded.

Such a strategy does away with the necessity for migration procedures, which may be expensive and difficult. Additionally, it guarantees that developers may promptly release a new smart contract version to resolve any vulnerabilities or quickly add new functionality, such as addressing bugs. A deployed smart contract could not previously be modified by developers. With Casper’s contract upgrading features, businesses can create solutions that are adaptable to changing market demands and customer trends.

For developers, Casper Network is a paradise. The network is committed to simplifying life for the programmers using its accommodating architecture. Moreover, because WebAssembly (Wasm) is supported by Casper, there is no longer any need for proprietary languages like Solidity.

The Casper architecture’s Highway Protocol is its central component. The Highway is a consensus protocol that was developed using Casper’s correct by-construction (CBC) specification to be both flexible and energy-efficient.

Highway offers a more advanced kind of block validation in contrast to traditional consensus protocols like Byzantine fault tolerance (BFT). More blocks can be completed because networks on Highway can attain greater finality thresholds in a non-binary fashion. Highway also gives participants, even slower ones, the freedom to define security levels.

The company CasperLabs, which created the Casper Network, is made up of a diverse group of former executives from prestigious companies, including Microsoft, Google, and Adobe. The team’s experience influenced Casper’s design in the business world. Although the project has been in development since 2015, its mainnet didn’t officially debut until March 2021. The Casper team has established the Casper Association, a distinct non-profit organization, to manage the continued development and decentralization of the Casper Network.

Casper is stepping up its efforts and has been successful in securing a number of notable collaborations, including a current one with SJM Group, in encouraging the adoption of Web 3.0 throughout the United Arab Emirates. As a result, from gaming projects to non-fungible token (NFT) developers to suppliers of Know Your Customer (KYC) solutions, a rising number of developers are opting to build their goods and services on Casper.

A new version of the Casper Signer is being developed, according to a recent announcement by the Casper Team. Although the team provided little information, they did mention that the upgrade will include a number of feature enhancements, such as an on-chain wallet, multi-platform support, and multi-browser support.

In order to improve the Casper Network’s openness and credibility, the team is also creating a Casper Membership Portal. Members will also have access to special benefits and prizes through the site. Additionally, using the site, validators will be able to take part in elections and the management of the Casper Association. The creation of the membership portal is reportedly nearing completion.

Casper cryptocurrency is undoubtedly one to watch in terms of affordable cryptocurrencies. There is a very capable staff behind it. The tokenomics that underlie it also make a lot of sense. Although we don’t believe this will surpass cryptocurrencies like Ethereum in terms of price anytime soon. It’s not beyond the realm of possibility over a long period of time.

Additionally, the Casper network has a good potential to shatter the NFT and DeFi worlds and compete with Ethereum. The Casper network’s underlying coin might start increasing swiftly if developers keep flocking to it.