07:00 GMT   Germany -GDP (Q4):The country already released its flash estimate for GDP in 2015, without breaking out Q4’s performance. Based on that estimate and hints from the Federal Statistical Office, there shouldn’t be any major surprise here.

10:00 GMT   EU – GDP (Q4):The market expects that growth in the Eurozone as a whole remained steady in Q4. A decent number probably won’t change any views on ECB policy or the EUR, though.

13:300 GMT   US – Retail sales (Jan):There were some quite serious snowstorms in January to distort the figures. Nonetheless, the market expects some recovery in core retail sales, which would probably be USD-positive.

After peaking in June, CHF/JPY has been steadily declining (i.e., JPY has been appreciating faster than CHF). 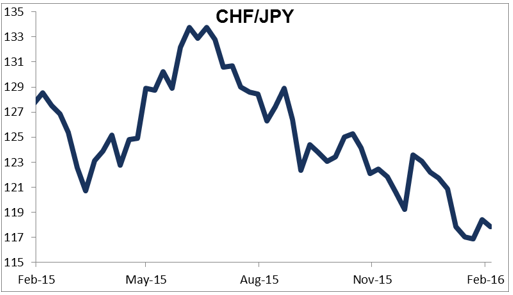 The pair temporarily moved up when the Bank of Japan moved into negative interest rates, but that move has faded entirely. 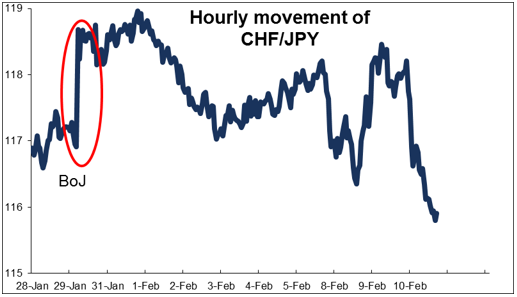