08:00 to 09:00 – France, Germany & Eurozone flash PMIs (Dec)– The preliminary estimates of the Purchasing Managers’ Indices (PMIs) for the EU are forecast to be little changed. The risk in my view is that they disappoint to the downside as the European economy takes on board the shocks from the refugee crisis and the Paris bombings.

09:30 – UK – Average Earnings Index + Bonus (Oct)–  Average earnings are expected to be up 2.5% yoy, a sharp deceleration from +3.0% in October. Stagnating growth in wages has been a matter of concern for the Bank of England so a result like this would probably be negative for the pound.

13:30 – US – Housing starts (MoM) (Nov)– Housing starts are expected to accelerate to a 1130k annual pace from 1060k. However, given the FOMC meeting, only an extreme number is likely to attract much attention.

19:00 – US – Federal Reserve Interest Rate Decision and statement– Has a Fed meeting ever been so much in focus? See yesterday’s comment for a full run-down of our view. In any event, given the time of year, when markets are thinner than usual, and the significance of the moment, expect some fireworks from both the FX and equity markets.

21:45 – NZ – GDP (QoQ) (Q3)– Last week the RBNZ cut interest rates by 0.25%, yet the NZD rallied. For all their rhetoric around expectations for a lower NZD, there was an upward revision to their GDP estimates. Growth is expected to have accelerated to +0.8% qoq in Q3 from +0.4% qoq in Q2, although that would leave the yoy rate of change little changed at +2.3% vs +2.4%. In the aftermath of the Fed this number may not garner as much attention as usual.

US corporate bond market may be signaling trouble ahead

Yesterday I mentioned that while the market is expecting the Fed to announce a hike in interest rates today, expectations for the future path of rate increases is much more modest than what the Fed is predicting. In fact, the forecasts may be discounting the possibility that the Fed might even have to stop hiking and start cutting again, perhaps launching Quantitative Easing IV.

Why might people be thinking such a thing, when the US economic statistics are fairly robust? It’s because of what’s going on in the US corporate bond market. Prices of some US corporate bonds have collapsing recently and several major bond funds have had to close. That reminds people ominously of what happened in 2007, when the collapse of the mortgage-backed securities (MBS) market later led indirectly to the big stock market and economic collapse of 2008.

As you can see, while investment-grade bonds have been relatively steady, the high-yield market started collapsing back in May. The fall has accelerated recently. 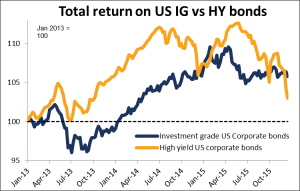 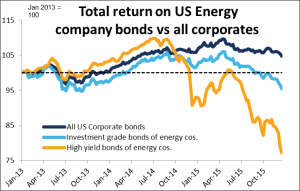 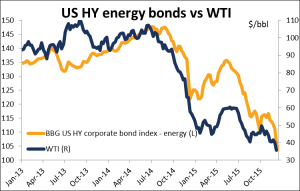 The fact that two high-yield bond funds have had to freeze redemptions and another went into voluntary liquidation reminds investors of how two subprime MBS funds halted redemptions in 2007. Investors didn’t worry too much about that at the time, but later the rot spread to the broader financial markets and we all know how that story ended.

This time around while the fear may be there, the reality is much different. Banks and security firms have much smaller positions in these securities, so even a major sell-off would not have the same implications for the entire financial system as it did back then. However, it’s also true that nobody then foresaw all the linkages and connections throughout the financial system – it could be that this sell-off will have wider implications that we just can’t foresee yet. For example, price declines in these illiquid assets could force investors to sell more liquid assets, sending stock prices down sharply and damaging consumer sentiment.