Daily Forex News and And Analysis

Daily Forex News and And Analysis – The single currency was weaker after the European Central Bank decided yesterday that it would continue with its bond purchases program. The ECB extended its QE plans from March 2017 to the end of the year.

However, the ECB signaled that the size of the bond purchases would be smaller at 60 billion, compared to the current size of 80 billion. The central bank’s decision renewed bets on continued monetary policy divergence with the Federal Reserve. However, the euro’s declines have been limited to 1.0600 for now ahead of next week’s FOMC meeting. 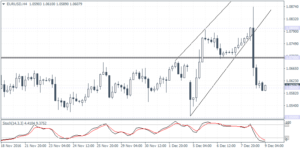 EURUSD (1.0607): EURUSD fell on yesterday’s ECB decision to expand QE by nine-months, despite the fact that the size of bond purchases being reduced by 20 billion. The single currency rallied intraday to the unfilled gap from 11 November at 1.0855 and quickly reversed the gains to slide back to 1.0600.

Price action could remain consolidated near the current levels, with the upside now likely to be capped at 1.0700 resistance level. The Stochastics on the 4-hour chart is oversold indicating a near-term rise in prices. However, 1.0700 remains crucial as only a break above this resistance could signal further upside in prices. 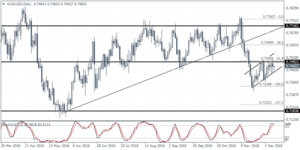 AUDUSD (0.7465): The Australian dollar has been consolidating below 0.7500 resistance level with a brief attempt to breach this level failing. The daily chart’s bearish flag pattern indicates potential continuation to the downside with a breakdown from the flag likely to see price slide towards the 18 November lows of 0.7339.

A break down from this support will extend the declines down to 0.7183. Validating this bearish outlook is the Stochastics which is currently overbought indicating further downside in prices. However, watch for a modest bounce off the 0.7339 support which could keep prices range bond in the near term. 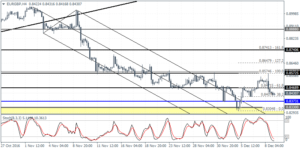 EURGBP (0.8430): EURGBP rallied to the highs above 0.85550 before sliding back lower. Price broke down below the 4-hour neckline resistance level of 0.8468 and could potentially put this bullish pattern to test. Failure to recover above 0.8469 could see EURGBP stay range bound with the potential to decline towards 0.8373.

There is, however, a new inverse head and shoulders pattern that is shaping up with the neckline resistance seen at 0.8572 with the current decline shaping up into the right shoulder. A reversal near 0.84080 – 0.8373 could signal a modest bullish bias with a breakout above 0.8572 seeing further gains that could target 0.8474.