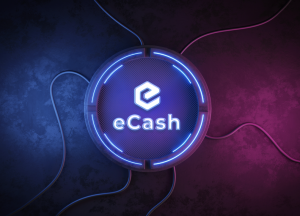 The website claims that eCash is a digital currency that is produced in the form of digital money. eCash is designed to be delivered from one person to another anywhere in the world, much like email. The initiative also involves using eCash to pay for products and services. The eCash (XEC) project aims to give the world a more secure P2P electronic currency system by building on the success of Bitcoin Cash. Particularly, the creators used the answers from Bitcoin Cash’s key lessons and applied them to eCash. Consequently, compared to its predecessor, the protocol is more adaptable, secure, and scalable.

The essence of eCash

Bitcoin Cash ABC (BCHA), which is a branch of Bitcoin and Bitcoin Cash, is now known as eCash (XEC) (BCH). It describes itself as a “cryptocurrency intended for usage as electronic money.” eCash’s sole purpose is to be a method of exchange for making payments for products and services. On July 1, 2021, the coin underwent a rebranding, and since then, it has made an effort to stand apart from its predecessor. Bits, the foundational units of eCash, play in the ground of Bitcoin Cash ABC’s cumbersome decimal places. When working with eCash, you would transfer 10 bits rather than 0.00001000 BTC. The proof-of-stake (PoS) consensus layer used by ECash is termed “Avalanche,” not to be confused with the blockchain Avalanche (AVAX). After changing its name, eCash declared that it would exchange all BCHA coins 1:1 for XEC.

The primary digital currency and utility token for eCash is called XEC. This cutting-edge crypto can be distributed openly and internationally in a matter of seconds. The network costs and execution of smart contracts are also paid for using the token. Staking incentives are given in XEC, which is traded on a number of well-known markets.

On November 15, 2020, the Bitcoin Cash blockchain was divided into two chains. One of the chains was known as BCHA, and on July 1, 2021, BCHA changed its name to eCash. Similar to Bitcoin, it has a 21m total supply. The Milton Friedman school of economics serves as the foundation for the entire endeavor.

Amaury Sechet, the principal creator of eCash (XEC), forked the Bitcoin Cash (BCH) blockchain to create the cryptocurrency that served as the forerunner to eCash, Bitcoin Cash ABC (BCHA). The turning point occurred on November 15, 2020. Sechet then decided to rebrand Bitcoin Cash ABC to create a new brand identity for eCash, arguing that a decrease in decimal digits would aid in the coin’s acceptance.

The multi-layered strategy of the eCash project combines a privacy-focused blockchain with an EVM Subchain to make it simple for developers to build Dapps and smart contracts. One of the greatest methods for brand-new blockchains to increase their scalability is by segregating the functionality of smart contracts. Significantly, the EVM moniker enables Ethereum developers to move or scale their present Dapps to the eCash network without having to completely rewrite their code.

What Issues Does eCash (XEC) Try to Address

The three key enhancements that the cryptocurrency’s developers are focusing on are as follows:

– enhancing the payment process by speeding up transaction completion

Subscribers of eCash can take advantage of a variety of advantages by joining the network.

One benefit is that the network is particularly secure since it incorporates elements of Bitcoin. For example, the network specifically incorporates a capped supply, a halving schedule, and a genesis block.

Scalability is one of the eCash’s key advantages. The Avalanche consensus process was developed by the creators to achieve nearly instantaneous confirmation times. The network employs mass parallelization and a multi-layered structure to do this operation. With this strategy, the network may grow from 100 tx/s to over 5,000,000 tx/s while still being responsive and legitimate.

The eCash Network: How is it Protected?

The creators of eCash intend to add proof-of-stake (PoS) to the network to accelerate transactions as opposed to the Bitcoin Cash ABC (BCHA) network, which is protected using a proof-of-work (PoW) consensus process. They refer to this as the “Avalanche post-consensus,” which would feature improved security, fork-free upgrades, and sophisticated opcodes due to improved script capabilities. To use both advantages, the Avalanche layer will be layered on top of the current PoW.

The network’s Avalanche consensus method is its initial feature. The network claims that Avalanche is an algorithm that permits immediate transactions with improved security. The algorithm makes it possible to update the coin without a fork. The algorithm aims to provide the eCash protocol with politically decentralized governance. Additionally, eCash facilitates the creation and trading of tokens by anybody. Instantaneously, a user may produce their own token. They have the option of adding their name, total supply, decimal points, and icon on the token. Another aspect of the initiative that promotes anonymity is Cashfusion. It also keeps a supply cap with anonymity, which can thus be readily audited.

A network addition for privacy control is the CashFusion Protocol. A high level of anonymity similar to the best privacy coins is offered by the system. As a participant in the Electrum ABC network, the system enables you to carry out private transactions. However, compared to standard transactions, these transactions are far more expensive to track.

When individuals stake XEC tokens, they receive prizes and more. Staking offers you a low-risk passive income stream while assisting with network security. Since your payouts are fixed depending on the number of tokens you stake, staking is less risky than trading. As a result, staking is considerably simpler to obtain consistent profits than trading.

The next innovation from the inventive brains behind the Bitcoin Cash project is the eCash network. The network blends decades of knowledge with cutting-edge technology. As a result, it is far more sophisticated than its forerunner and offers more scalability, security, and effectiveness. As the network continues attracting more developers and users because of its beneficial characteristics, you can anticipate hearing much more about eCash.