EUR/USD Intraday –  The EUR/USD pair initially rose during the day on Tuesday, but turned back around to form a shooting star. The shooting star of course is a very negative sign, but as we have recently broken above resistance, it makes sense that the market will pullback in order to build up enough momentum to continue going higher. If we can break above the top of the shooting star from the Tuesday session, we would be buyers. On the other hand, if we pullback and find support below would be more than reason enough to start going long, as I see a significant amount of support down to the 1.14 handle. 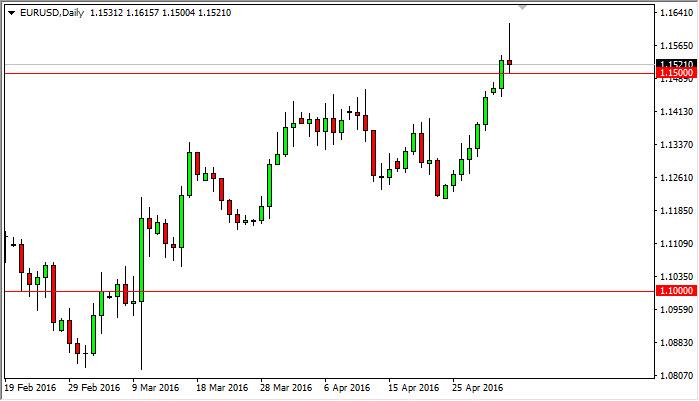 Comment: The pair broke below the lower boundary of a bullish channel.

Dollar on the Defensive

The dollar has taken a considerable beating over the past week, although has clawed back some of the losses over the past 24 hours. In the bigger picture, we’ve once again reached the phase where the stronger dollar story, based on widening policy differentials, is lying shattered. The dynamics of the currency markets are also changing on the non-dollar side, with those central banks that are still easing in non-conventional ways (principally EUR and JPY) finding that their currencies are not reacting in the way anticipated or desired. The euro is up nearly 2% since it last eased policy early March, with the yen up 4% over the same period and nearly 11% since the announcement of negative (deposit) rate at the end of January. Of course, the weaker dollar has played a part in this, but the euro is up vs. most of the major currencies as well over this period. The bottom line is that the old rules have been replaced and monetary policy is no longer the primary driver of currencies.

Yesterday, there were also some Fed officials on the defensive, with Lockhart calling a June move “a real option” with Williams also sounding hawkish. For today, the early focus will be with the final PMI data for the Eurozone at 08:00 GMT. We also have the ADP numbers in the US ahead of the US payrolls data on Friday. Durable goods data also seen at 14:00 GMT. In terms of levels, the 1.1616 high on EURUSD sets a new resistance level, whilst 105.55 is the initial support on USDJPY.