The past few days have seen geo-political tensions rise between North Korea, the US, Russia & China. North Korea’s recent ICBM test further fueled the United States condemnation of the regime, with the US asking China to impose sanctions on North Korea. North Korea claims the recent successful missile test now brings the mid-west of the US and possibly New York within range. In a “show of force” the US flew 2 jets close to North Korea over the weekend and have made it clear that they will take the “necessary” force to ensure US security is not undermined.

On Friday, the US imposed sanctions against Russia as a result of Russian interference in last year’s Presidential election, Russia has now demanded that the US remove 755 diplomatic staff by September. The markets will be keenly awaiting news of more sanctions and further deterioration of diplomatic relations between the US, Russia, North Korea and China. Recent Chinese manufacturing purchasing managers index data showed a positive sentiment towards the Chinese economy which will help many economies globally, specifically those in the Pacific rim. The markets will be awaiting Central Bank statements this week from the RBA and BoE, and the release of, the always impactful, US NFP on Friday.

EURUSD remains buoyed by USD weakness, holding well above 1.1700 to currently trade around 1.1735.

USDJPY has weakened over the weekend by 0.1% to currently trade around 110.60.

GBPUSD has also benefited from USD weakness and currently trades around 1.3130.

WTI traded above $50pb, the first time it has done so since May, in early Monday trading. WTI currently trades around $49.95pb.

At 10:00 BST Eurostat will release Eurozone CPI & Core CPI (YoY) (Jul). Market consensus is for no change in the reading from the previous reading of 1.3%. With the ECB inflation target of 2% it appears highly unlikely such a level will be reached anytime soon – prolonging any possibility of an interest hike in the Eurozone. At the same time, Eurostat will release Eurozone Unemployment, with the consensus being 9.2% a slight improvement from the previous 9.3%. The ECB will want to see this rate fall substantially to show a strong labour market and therefore a strong economy.

Later in the day, at 14:45 BST, ISM-Chicago will release the Chicago Purchasing Managers Index (Jul). Confidence in the strength of the US economy has come into question of late and the consensus of 61.3 (prev. 65.7) will do little to calm markets perception of this. 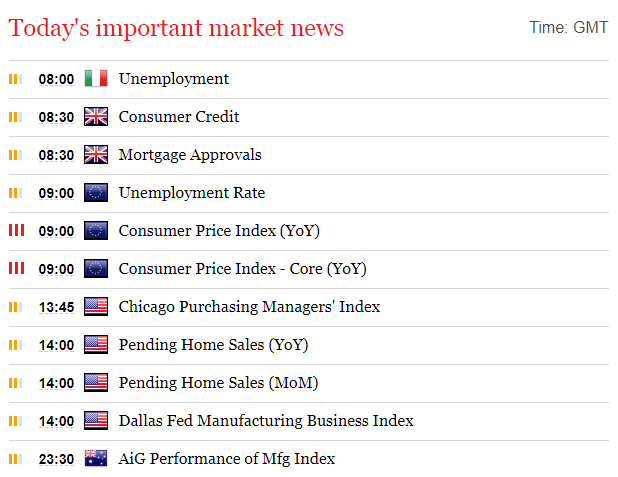