Gold markets initially rallied during the day on Tuesday, but struggled near the $1075 level. This is an area that turn the market around to form a shooting star, and that of course is one of the most negative candle as we can see. This is a strong downtrend and with the strengthening US dollar, it is probably only a matter of time before we reach the $1050 level again, and then more importantly the 1000 handle. The 1000 handle is a large, round, psychologically significant number, so we very well could find buyers in that region. At this point though, we continue to sell short-term rallies as they offer selling opportunities at the moment with such bearish pressure on gold.

Keep in mind that the Federal Reserve is expected to raise interest rates sometime in the very near future, and that of course puts upward pressure on the US dollar in general, and as a bit of a “knock on effect” it brings down the value of gold. It doesn’t mean that they both can’t rally at the same time, but quite frankly a lot of it comes down to the reason why.

The fact that the US dollar is getting stronger continues to work against the value based upon the fact that it takes less of those US dollars to purchase commodities in general. Gold of course isn’t any different, and in some ways of the lot worse when it comes to these situations as it is considered to be the “anti-dollar” by several traders out there. At this point, we’ll see any scenario in which we serve buying gold, at least not until we get to at least the $1000 handle. Down there, the market broke out significantly years ago, so there should now be quite a bit of psychological support in that vicinity. In fact, that could be the bottom for gold, but it is far too early to start thinking about that at the moment. We are oversold at the moment, so expect volatility, choppiness, and rallies that you can sell. 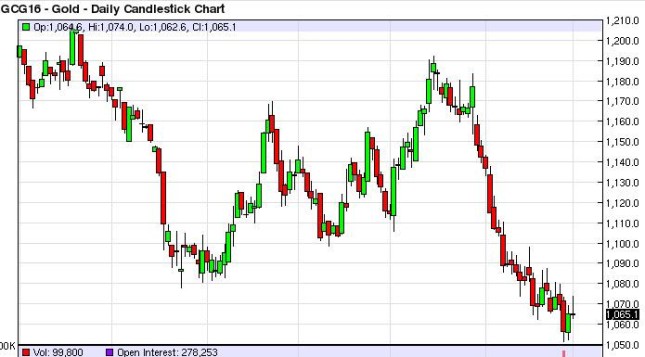 Gold is an oversold area .buy Gold above 1069.188 with tight stop loss

in case see the uptrend of the price the first resistance level is at $1071.20 per ounce