09.30 GMT – UK – Average Earnings + Bonus (Dec) – The falling rate of pay settlements recently has been a puzzle for the Bank of England. The statement following the recent MPC meeting noted that “despite continued reductions in the rate of unemployment, pay growth remains restrained and appears to have dipped slightly in the most recent data.” In fact it’s dipped more than slightly – while the yoy change has slowed from +3.0% to +2.4%, the 3m change annualized has slowed to less than 1%. It’s expected to dip further in the data to be released Wednesday. That could prove negative for GBP. 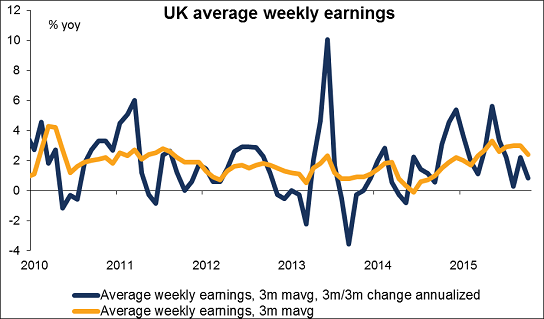 09.30 GMT – UK – Employment data (Nov, Dec) – The MPC also noted that the near-term outlook for economic activity is a bit weaker than they had anticipated. Weaker growth could slow the downward trend of unemployment, further reducing the upward pressure on wages and making it less likely that the Bank of England will start hiking rates.

13.30 GMT – US – Housing starts, building permits (Dec) – Housing starts are expected to rise modestly as multi-family home starts should continue to rise. However, the more forward looking building permits are expected to drop somewhat after a sharp rise in November. That could add to the slight drop in yesterday’s National Association of Homebuilders (NAHB) housing market index to give a negative view on the housing market. A slowdown in housing could call into question whether the Fed can tighten further and so would be USD-negative.

13.30 GMT – US – CPI (Dec) – CPI is not the Fed’s target but it is of course the most widely recognized measure of inflation. No change from the previous month means some acceleration on a yoy basis, but still not enough for anyone to think that the Fed is near to meeting its target. Note that the core CPI is running above the core Personal Consumption Expenditure index, which is the Fed’s target, so even further rise might be discounted as irrelevant for the Fed’s preferred measure. 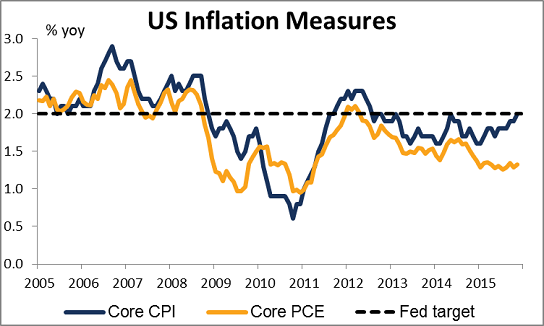 15.00 GMT – Canada – Bank of Canada rate decision – Analysts are forecasting a 25 bps cut and the market is pricing in a 60% chance of a cut. They could stand pat however. CAD has been collapsing recently, causing a notable rise in the price of imported food, much to the distress of the average Canadian. Cutting rates further could weaken the currency further and push food prices up more. Nonetheless, with inflation still well below the BoC’s target (December figures to be released on Friday), the BoC may well feel that it has room to help an economy battered by the plunge in oil prices. Moreover, the BoC is pinning its hopes on a revival of non-commodity exports to get the economy moving again. However, this is not taking place because much of the manufacturing industry moved elsewhere during the early 2000s, when Canadian labor costs rose and the currency was much stronger. As a result, non-commodity exports have not yet recovered to their pre-crash levels. This probably gives the BoC a bias for a weaker currency. The results could be negative for the CAD.