Killer Patterns – In this eBook are several patterns which produce great trading signals/ trading opportunities for
trading stocks, futures, FOREX and so on especially when two or more of these patterns occur at once in the same time frame or in more than one time frame.All jargon or terms like this are explained later so that identifying and using these killer patterns is extremely easy.
Entering a **short trade** based on three sell signals would be a no-brainer, especially if one of these sell signals was the one shown on page 19.[[Entering a short trade means selling to start with, without having bought anything first – and this is also known as selling to open a position. The opposite is entering a long trade, which means buying to start with, without having sold anything first – and this is also known as buying to open a position.Furthermore, the longer the time frame that the patterns occur in the longer the move is likely to be — either up or down. So patterns noticed on the weekly charts will produce bigger moves than patterns noticed on the daily charts. Also, signals in longer time frames are more reliable than signals given in shorter time frames.

A histogram is a bar chart.This indicator is one of the best and it shows whether **bulls or bears** are controlling prices and whether they are growing stronger or weaker. These signals are very easy to read too.[[Bulls believe that prices will rise -– so they buy to start with and bears believe that prices will fall — so they sell to start with.]]
The slope of the MACD histogram is more important than whether or not it is above or below the centre line.

It follows that the best sell signals are created when MACD histogram is above the centre line and its slope turns so that it is downwards. This shows that the bulls have become tired. These sell signals are backed up and become extremely strong when there is a **bearish divergence.** So there are two main types of signals given by MACD histograms. 1) The first type is just based on the direction of the slope of the histogram from
one bar to the next.If the slope is down (meaning that the most recent bar is lower than the one before it) it shows that the bears are in control and you should be short.2) The second type is MACD Histogram Divergences -–both bearish and bullish.

2) How to Trade Based on MACD Histogram Divergences
Now we’ll move onto the strongest MACD histogram signals and some of the strongest signals in technical analysis. [[Put simply — divergences between indicators and prices means they have moved in different directions to each other.]]Important. There can be some space between the tops or the bottoms that make up each MACD histogram
pattern ie these tops (or bottoms) don’t have to immediately follow each other.
Strongest Divergences
Strongest Bearish Divergences
MACD divergences generally indicate that a major reversal is about to occur but they do not happen at every major top or bottom.A strong bearish divergence is where prices reach a new high but the MACD histogram makes a lower top. This shows that the bulls are becoming weak. To trade this you should go short when the MACD histogram ticks down after its second top (the lower top) when prices are at a new high. Your stop loss should be placed above the most recent high in prices. 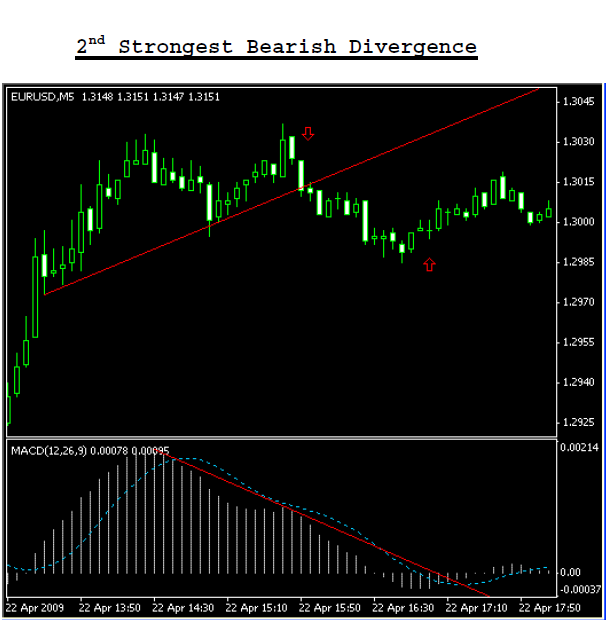 If you get stopped out because prices go beyond the latest high, look for a Triple Bearish Divergence.These signals are even stronger than normal divergences. They are identified by three price peaks and three indicator tops. Go short when the MACD histogram ticks down after its third top (the lowest top) when prices are at a new high.
Again, you should place your protective stop above the most recent and highest high in prices. 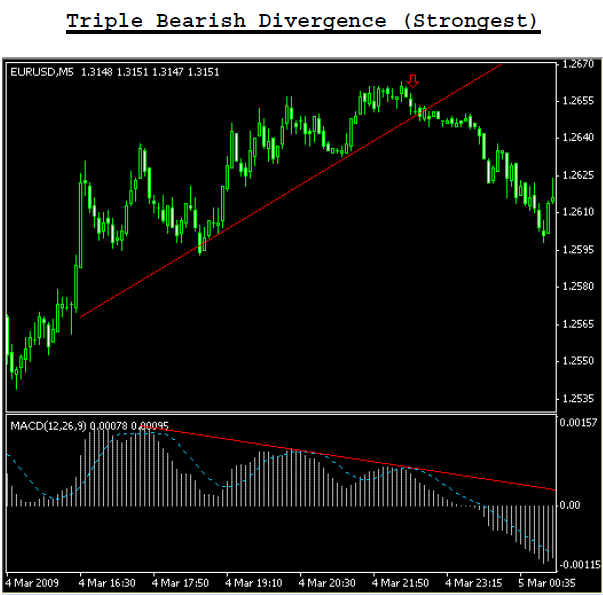 As was said earlier — the new downtrend in prices is confirmed if prices keep dropping to new lows and the MACD histogram continues to go lower at the same time.